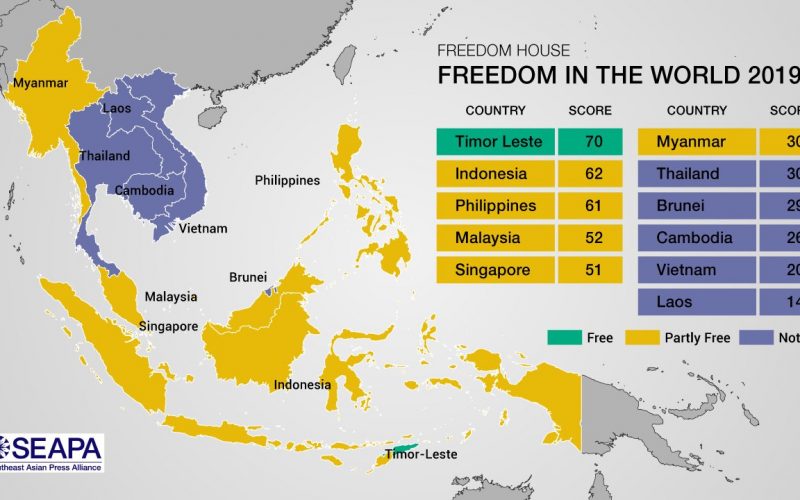 Political freedom across the globe has been declining in the last 13 years, and Southeast Asia is no exception.

“Democracy is in retreat,” says the newly released “Freedom in the World 2019” report of Freedom House. As a result global freedom is in a steady slump. And as democracy declines, so does the right to freedom of expression.

“In 2018, Freedom in the World recorded the 13th consecutive year of decline in global freedom,” says the U.S.-based non-government organization that tracks the state of democracy, political freedom, and  human rights across the world.

“Hostile forces around the world continue to challenge the institutions meant to protect political rights and civil liberties, and the damage accrued over the past 13 years will not soon be undone.”

The reversal has spanned a variety of countries in every region, from long-standing democracies like the United States to consolidated authoritarian regimes like China and Russia,” says the report released on 4 February 2019.

Two Southeast Asian countries – Cambodia and Myanmar – featured in the report illustrate the spate of  attacks on press freedom, political, and civil rights. Malaysia was included in a short list of countries where “some lights shine through” for its historic May 2018 elections.

“Press freedom scores fell in four out of six regions in the world,” says the report. “Flagrant violations, like the imprisonment of journalists Wa Lone and Kyaw Soe Oo for their investigative reporting in Myanmar, have become more widespread.”

The report also noted that ethnic cleansing – now a grim reality in 11 countries, up from three countries recorded in 2018 –  is a “growing trend.” In Myanmar, alongside Syria, “hundreds of thousands of civilians from certain ethnic and religious groups have been killed or displaced as world powers either fail to respond adequately or facilitate violence.”

“Myanmar’s military was accused by UN investigators of committing genocide against the Rohingya people. Over 700,000 of whom have fled to Bangladesh since the start of a violent crackdown in 2017,” the report points out.

Malaysia was the only speck of bright light in the region, having ended a 60-year rule of the political party of disgraced prime minister Najib Razak in the May 2018, “clearing the way for a new government that quickly took steps to hold Najib and his family to account for a massive corruption scandal.”

Here are the aggregate scores of countries in Southeast Asia, based on a scale of 0 (“least free”) to 100  (“most free”):

The Freedom in the World report evaluates the state of freedom in 195 countries and 14 territories based on the following indicators: electoral process, political pluralism and participation, functioning of government, freedom of expression and belief, associational and organizational rights, rule of law, and personal autonomy and individual rights.