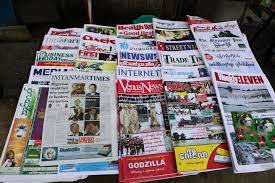 The International Federation of Journalists (IFJ) strongly criticizes the decision by the Myanmar authorities to arrest and detain two journalists for criminal defamation. The IFJ calls for the immediate release on the two journalists and for the charges to be dropped.

On June 1, 2017, Kyaw Min Swe, the editor of The Voice newspaper, and Ko Kyaw Zwa Naing, pen name Ko Ko Muang, a columnist at The Voice, were arrested by police under Article 66 (d) of Myanmar’s Telecommunications Law for defamation. The two journalists were arrested after charges were filed by the Myanmar military for an article published in March 2017.

The article, titled Oath of the Nation of Bullets` discussed an army-produced propaganda film Pyidaungsu Thit Sar (Faithful to the Union), which praises the army’s victories over ethnic armed groups. According to Frontier Myanmar the article took aim at senior leaders for sitting around holding peace talks and drinking wine while low-rank soldiers are being killed.

According to Myanmar’s constitution, Section 21(b) of the constitution states, “No citizen shall be placed in custody for more than 24 hours without the permission of a Court.” On Saturday, June 2, the Bahan Township Court held a rare Saturday morning session to extend the detention of Swe and Naing. The pair will be held until the next hearing on June 8. The defence had no representation at the hearing, however. Their legal adviser, U Khin Maung Myint, said later that he had not been informed it would go ahead, and planned to submit a complaint to the authorities.

If convicted, the journalists face a maximum sentence of three years’ imprisonment and fines.

The Telecommunications Law is fast becoming a tool of choice to stifle critical voices in Myanmar. In November 2016, Eleven Media Group CEO, U Than Htut Aung and chief editor, U Wai Phyo began their trial in the criminal defamation case. They were sued by the Rangoon chief minister over an editorial published which claims a USD 100,000 watch he wears was gifted to him.

The IFJ said: “Criminal defamation is becoming the tool of choice in Myanmar to silence dissident voices, working to stifle press freedom and freedom of expression. We demand the immediate release of Swe and Naing and call for the charges to be dropped. Issues such as these should be dealt with by the Press Council and not in the courts.”