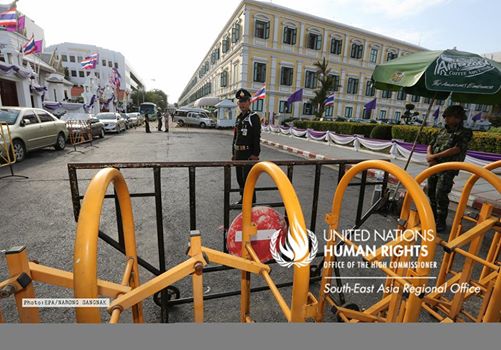 We are very concerned by the rise in the number of lèse majesté prosecutions in Thailand since 2014 and the severity of the sentencing, including a 35-year jail term handed down last Friday against one individual. A Thai military court found Wichai Thepwong guilty of posting 10 photos, videos and comments on Facebook deemed defamatory of the royal family. He was sentenced to 70 years in jail, but the sentence was reduced to 35 years after he confessed to the charges.

This is the heaviest sentence ever handed down under Article 112 of the Criminal Code, which is also known as the lèse majesté law. The previous heaviest sentences were handed down in 2015, when three people were jailed for between 25 and 30 years by military courts on the same charges. The offence carries a penalty of three to 15 years in jail for each charge of insulting the monarchy.

Statistics provided by Thai authorities show there has been a sharp fall in the number of people who have been able to successfully defend themselves against lèse majesté charges. From 2011-13, around 24 percent of people charged with the offence walked free, but over the next three years, that number fell to about 10 percent. Last year, that figure was only 4 percent.

While our Office appreciates the complexity and sensitivity of the issue surrounding lèse majesté in Thailand, we are deeply troubled by the high rate of prosecutions and the courts’ persistence in handing down disproportionate sentences for the offence. All people have the right to freedom of expression, including when it comes to criticising public figures. Imprisonment of individuals solely for exercising the right to freedom of expression constitutes a violation of Article 19 of the International Covenant on Civil and Political Rights (ICCPR), which Thailand acceded to in 1996. In March 2017, the UN Human Rights Committee, which reviews implementation of the ICCPR, concluded that Thailand should review Article 112 of the Criminal Code to bring it into line with Article 19 of the Covenant.

We also have concerns about the conduct of the trials since the military coup of 2014. Most of the lèse majesté cases have been tried before a military court, and the hearings have been closed to the public. Most of the accused have been denied bail and some held for long periods in pre-trial detention. While we welcome the Government’s decision in September 2016 to cease hearing future lèse majesté cases in military courts, we reiterate our call to authorities to apply this is to all pending cases, retroactively.

Our Office calls on the Thai Government to immediately amend the lèse majesté law to bring it in line with international human rights standards and to review all cases brought under Article 112 of the Criminal code.