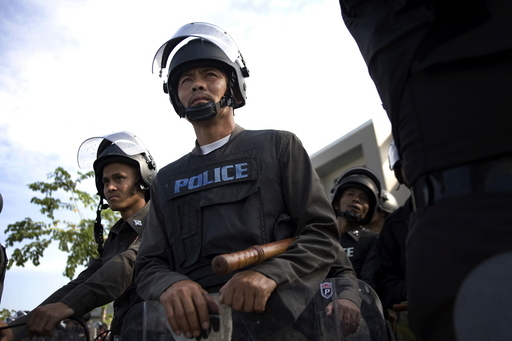 This statement was originally published on article19.org on 8 May 2017.

ARTICLE 19 condemns the detentions of human rights lawyer Prawet Praphanukul, activist Danai Tibsuya, and four unidentified others arrested and charged under the repressive lèse majesté provisions of the Thailand Criminal Code, which prohibit any insults or defamation of the Thai Royal Family, and for other offences under the Criminal Code and Computer Crimes Act. The six were arrested for a series of Facebook posts and are currently being held on remand. ARTICLE 19 calls for their immediate release and for all charges to be dropped, as well as for the military government to end its crackdown on free speech, including by immediately repealing provisions criminalising lèse majesté, and comprehensively reforming the Criminal Code and Computer Crimes Act.

Several of the six currently in detention are reported to have been arrested for sharing a post by Thai historian Somsak Jeamteerasakul about the replacement of a plaque in Bangkok marking the 1932 revolution with one celebrating the monarchy. In April, the Thai authorities announced that following his account and liking or sharing his posts on Facebook could amount to a violation of the Computer Crimes Act.

Praphanukul, a human rights lawyer who has previously defended other activists facing lèse majesté charges, was arrested and charged under Sections 112 and 116 of the Criminal Code and Section 14(3) of the Computer Crimes Act on 29 April 2017. He was arbitrarily detained and held incommunicado by the military for five days following his arrest, before being transferred to civilian detention.

Since the 2014 military coup there has been an alarming increase in arrests and prosecutions under the lèse majesté provision of the Criminal Code, which makes it an offence for “whoever defames, insults or threatens the King, the Queen, the Heir-apparent or the Regent”. The provision, regularly used to target dissent and criticism by the increasingly repressive military government, is clearly against international human rights law. ARTICLE 19 has long advocated for the repeal of all criminal defamation laws, and contended that under no circumstances should special legal protection be granted for heads of state or other public officials, whatever their rank or status.

In addition to the lèse majesté provisions, ARTICLE 19 has called for comprehensive reform to the recently amended Computer Crimes Act, including to several provisions that allow authorities nearly unfettered power to restrict freedom of expression online. Section 14(3) criminalises as “computer forgery and fraud” putting into a computer system “any computer data” which is “an offense about the security of the Kingdom or is an offense about terrorism”. The provision is impermissibly broad and therefore against international human rights law, enabling its abuse to restrict any form of dissent unrelated to any legitimate national security interest. It is among several provisions in the Computer Crimes Act that ARTICLE 19 has advocated should be repealed in its entirety.

The UN Human Rights Committee, in its Concluding Observations on Thailand’s compliance with the ICCPR (International Covenant on Civil and Political Rights) on 25 April 2017, expressed concern at the use of the Criminal Code and Computer Crimes Act to restrict freedom of expression, and urged the government to end the use of these laws “as tools to suppress the expression of critical and dissenting opinions”.

The Thai military government maintains a derogation from Article 19 of the ICCPR, in place since May 2014, for “the prohibition of broadcasting or publishing certain content, particularly those inciting conflict and alienation in the society, false or provoking messages”. However, the UN Human Rights Committee has expressed concerns regarding the derogation’s compliance with the requirements of Article 4 of the ICCPR and its General Comment No. 29 (2011). ARTICLE 19 considers the derogation invalid, as it is far too broad and far-reaching to be considered strictly required by any urgent or legitimate national security need. It must be withdrawn, and the full protections of the ICCPR reinstated, without delay.

Freedom of expression plays a vital role in safeguarding democracy and keeping the public informed of important political debates. The threat to freedom of expression from repressive laws in Thailand is extremely concerning, particularly in view of the recent constitutional referendum and next year’s postponed elections.

ARTICLE 19 urges the Thai authorities to immediately release the six detainees and drop all charges against them, as well as to end military detention of civilians, particularly for expression-related charges. We call for urgent steps to be taken to bring the Criminal Code and Computer Crimes Act into compliance with international human rights law, including through the repeal of lèse majesté and other frequently abused provisions, in order to fully protect freedom of expression, online and offline.