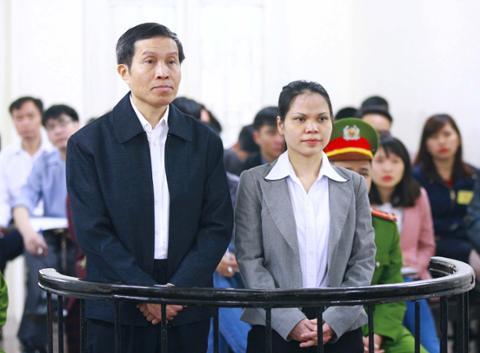 The Vietnam government should immediately free prominent bloggers and activists imprisoned for exercising their rights. During the last week of March 2016, Vietnam convicted seven bloggers and rights activists and sentenced them to prison.

On March 23, 2016, the People’s Court of Hanoi sentenced Nguyen Huu Vinh, a blogger, to five years in prison and his colleague, Nguyen Thi Minh Thuy, to three years for operating a website that provides links to social, political, economic, environmental, and cultural issues in Vietnam. The two were charged with “abusing rights to democracy and freedom to infringe upon the interests of the State” under article 258 of the penal code. Pham Doan Trang, the co-author of one of the articles cited in the indictment, sought to attend the trial as a concerned witness, but police detained her on the morning of the trial and only released her after the verdict was issued.

On March 24, the People’s Court of Thanh Hoa convicted the 73-year-old anti-corruption campaigner Dinh Tat Thang and sentenced him to seven months and 11 days in prison, also for violating article 258. The indictment reported by state media said that he “continuously sent letters to denounce, slander, insult and offend the individual honor, dignity and prestige of a number of leaders from the central level, from Thanh Hoa province and from the Party cell, the People’s Committee and the Police of Tho Xuan district.”

On August 5, 2015, Dinh Tat Thang wrote a letter to the Vietnam Fatherland Front, a party-controlled umbrella group of pro-government mass movements in Vietnam, denouncing the practice of faking paperwork to receive state benefits for wounded veterans in Thanh Hoa province. The letter cited the older brother of police director of Thanh Hoa province as an example of someone whom he alleged was not entitled to such benefits. Police arrested Dinh Tat Thang 11 days later. This is not the first time, though, that the authorities have imprisoned him for fighting corruption. In 2008, he was sentenced to nine months in prison, also for denouncing corrupt leaders, both local and national.

On the morning of March 30, the People’s Court of Ho Chi Minh City sentenced a prominent blogger, Nguyen Dinh Ngoc, to four years in prison, to be followed by three years on probation that require him not to leave his residential ward.

In the afternoon, the same court convicted three land rights activists – Ngo Thi Minh Uoc, 57, Nguyen Thi Be Hai, 58, and Nguyen Thi Tri, 58 – to four years, three years, and three years respectively. They will also have to serve two to three additional years on probation with restricted movement after completing their sentences.

According to the indictment reported by state media, on December 25, 2014, the police received correspondence from the Saigon Post and Telecommunications Service Corporation, contending that Nguyen Dinh Ngoc was using the internet to “disseminate articles that speak badly of the Party and the State of Vietnam.” He was arrested two days later and charged with “conducting propaganda against the state” under article 88 of the penal code.

Ngo Thi Minh Uoc, Nguyen Thi Be Hai, and Nguyen Thi Tri, were also convicted for “conducting propaganda against the state” under article 88. They were accused of waving flags and slogans that the government maintains “have the content opposing the state and propagandizing for a change of government” in a protest outside the US Consulate in Ho Chi Minh City on July 7, 2014. According to the jury, reported by state media, three activists’ actions were “very serious, infringing on national security, distorting, instigating, causing suspicion, and mistrust of the people in the [Communist] Party and state.” The three are long-time land rights activists from the Mekong Delta who have spent years petitioning local government for the loss of their land to no avail.