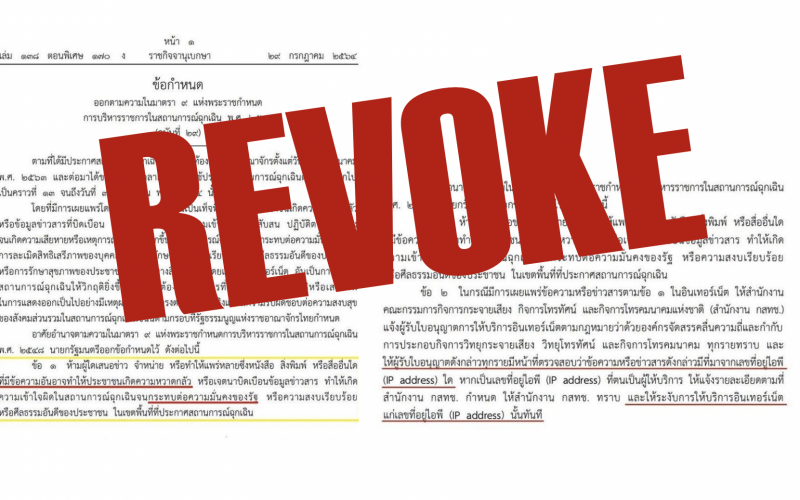 We, Manushya Foundation, Access Now, ALTSEAN-Burma, Cambodian Center for Human Rights (CCHR), the Institute of Policy Research and Advocacy (ELSAM), PEN International, and Southeast Asia Freedom of Expression Network (SAFEnet) as the ASEAN Regional Coalition to #StopDigitalDictatorship, stand in solidarity with independent media, civil society and internet service providers in Thailand and call for an immediate repeal of the Regulation No. 29, requiring internet service providers (ISPs) to check the IP addresses of online users who post any news or information that ‘may create fear among the people’ concerning the COVID-19 pandemic and to suspend their internet services. We condemn the administration of Prime Minister Prayut Chan-o-cha’s ongoing digital dictatorship, which threatens online freedoms and hinders independent media from revealing the truth behind #WhatsHappeningInThailand.

We call on the government of Thailand to uphold its international human rights obligations under Article 19 of the Universal Declaration of Human Rights (UDHR), and under Article 19 of the International Covenant on Civil and Political Rights (ICCPR), both of which protect the right to freedom of expression of individuals as well as that of the press, including their right to seek, receive and impart information through the media, including online. We also urge the government to protect human rights in line with the UN Guiding Principles on Business and Human Rights.

We denounce the government’s failure to comply with its international human rights obligations and the weaponization of undemocratic regulations, orders and restrictive laws, including the 2005 Emergency Decree on Public Administration in Emergency Situation (Emergency Decree), the Computer Crime Act (CCA), and the royal defamation (lèse-majesté) provision under Thailand’s Criminal Code, which grant the authorities sweeping powers to crack down on freedom of information online and suppress critical expression.

On 29 July 2021, a new Regulation No. 29 was issued under Section 9 of the Emergency Decree, which came into effect the following day. It bans reporting, distribution or dissemination of “any book, publication, or any other media containing text” that “may create fear” or “that are intended to spread inaccurate news/information to generate misunderstanding about the emergency situation with adverse impact on national security, public order, or public morality”. This new regulation is extremely dangerous. While the COVID-19 pandemic continues to be abused as a guise to crack down on online freedoms and Prayut’s ongoing war against ‘fake news’ intensifies, this new regulation now targets any information – even if it is accurate – which may “cause fear”. It also empowers the Office of the National Broadcasting and Telecommunications Commission (NBTC) to instruct ISPs to track IP addresses from which prohibited information has been posted. The ISPs are then required to report findings to the NBTC and to immediately suspend the internet service of end-users. This regulation shortens processes for authorities to censor content online by allowing for the blocking of users’ internet access without any independent oversight nor legal accountability. Moreover, relevant information will be forwarded by the NBTC to the police for further legal action, and online users violating the regulation can be prosecuted under Section 18 of the Emergency Decree, which provides for imprisonment of up to two years and/or a fine of up to 40,000 baht. ISPs also risk losing their operating licenses and could face legal action if they fail to comply with the regulation.

It should also be noted that the powers granted to the Thai government under this regulation contravene Section 9 of the Emergency Decree which does not confer the government such blanket power to suspend internet services, as observed in a legal analysis by iLaw. The suspension of communication services, as laid out in Section 11 of the Emergency Decree, shall be invoked only during a ‘Severe State of Emergency’, an exceptional situation which needs a prior formal declaration. No such declaration has been made at time of writing.

This regulation came amid a number of recent government actions to combat COVID-19-related “fake news”. On 10 July, Regulation No. 27 under the Emergency Decree was announced and came into force on 12 July, punishing those disseminating information that provokes “fear” or “misunderstanding” or “affects national security or public order or the good morals of the people” with a two-year imprisonment and/or a fine of up to 40,000 baht. On 27 July, a Facebook post by the Prime Minister also ordered government agencies and departments to prosecute individuals, including journalists, celebrities and social media administrators, for spreading “fake news” about the COVID-19 pandemic that might cause public confusion during the pandemic. This public threat came after 25 celebrities, influencers and public figures were investigated for voicing their concerns about Thailand’s worsening COVID-19 crisis and criticizing the government’s poor vaccination plan. Last month, the 18-year-old rapper, Danupa “Milli” Khanatheerakul was fined 2,000 baht after criticizing the government’s response to the pandemic on social media.

The lack of clarity as to what constitutes “fake news” or information provoking “fear” and affecting “national security” opens the door to subjective interpretation, allowing authorities to arbitrarily enforce the provisions and target free expression, including legitimate criticisms of the government’s handling of the pandemic and even information that is factually accurate. This is a clear example of the Thai government’s authoritarian attempt to control information online, justifying such interference with illegitimate reasons under international law. This regulation can open a myriad of doors to its being instrumentalized as a weapon against public opinions and media freedom, and is therefore not in compliance with international human rights norms. It clearly undermines the ability of journalists to report freely on matters of public interest, and its disproportionate restrictions on freedom of expression and the free flow of information under the pretext of COVID-19 cannot be justified.

We commend and stand in solidarity with all people speaking truth to power, pushing back against dictatorship and fighting for true democracy in Thailand. Dr. Boon Vanasin, chairman of Thonburi Healthcare Group, responded to a lawsuit report filed against him by the Government Pharmaceutical Organisation (GPO) for his comment about the procurement of Moderna COVID-19 vaccine, by saying that it was a good opportunity for the truth to be disclosed by the court. On 2 August 2021, representatives from major Thai news agencies stood in unity against the new regulation by filing a civil lawsuit against the Prime Minister over the legality, necessity and proportionality of the provisions mandating the suspension of internet services in order to suppress so-called “fake news” or any accurate information creating “fear”. The court has accepted the petition.

We also express our concern over the pressure exercised by authorities on international technology companies and ISPs which are required to facilitate censorship in the digital space. In June 2021, the Ministry of Digital Economy and Society warned of legal action against Facebook for refusing to comply with court orders to close the accounts of eight individuals who had allegedly posted false information and criticized the monarchy or the government.