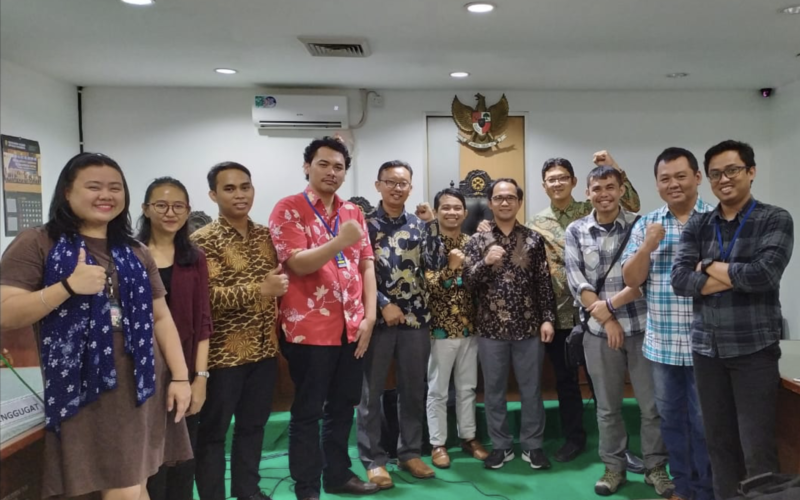 The Press Freedom Defender Team presented two experts to examine the internet shutdown in Papua and West Papua in 2019, at the Jakarta Administrative Court Meeting, Wednesday (11/2020). The two experts are Herlambang P Wiratraman, a lecturer at the Faculty of Law of Airlangga University who has been paying attention to the issue of human rights and press freedom. And Oce Madril, a lecturer from Department of State Administrative Law at the Faculty of Law of Gajah Mada University.

The panel of judges examined the statements of the two witnesses separately. Firstly Herlambang outlined the protection of human rights in relation to the termination of internet access in Papua, particularly on freedom of expression, opinion, including freedom of information or the press. Protection of these rights are established in the international legal system and the national legal system.

In the international legal system, there is ICCPR, which has been ratified by Indonesia through Law 12/2005. Whereas in the national law, it is also regulated in the constitution and its derivative regulations.

In relation to the internet shutdown in Papua and West Papua, Herlambang explains guarantee had been regulated in at least four articles in the Indonesia Constitution (Article 28, Article 28 c paragraph 2, 28 e 3, and 28 f). It is also regulated in a number of articles in the Human Rights Law and Article 4 of the Press Law. The work of the Press is protected by the Press Law and is uncharged in violation of the law, thus restricting the work of the press is included in the category of human rights violations.

The restrictions on human rights must be linked to Article 19 paragraph (3) of the ICCPR, in which restrictions are possible (Permissible Limitations) as long as that it meets international legal standards, such as Prescribed by Law, Legitimated Aim, and Necessary.

Prescribed by Law is related to the application of law, whether it’s right or wrong. This require restriction standard that is regulated in the Siracusa Principles doctrine. Legitimated Aim deals with restrictions that must meet one of the specified objectives listed in the text of human rights law instrument, especially in reference to Article 19 paragraph (3) of the ICCPR. Necessary relates to the principle of necessity and proportionality.

He said citizens were at disadvantage with the act of terminating internet access, such as (bandwidth) throttling. The act of terminating internet access should be able to use mechanisms regulated in the international legal system. As stated within the Prescribed by Law, restrictions must be stated in a particular decision or regulation to be held accountable. It can even be controlled by parliament, the judiciary, or a special body appointed by the government.

Furthermore, from a human rights point of view, in doing restrictions the government must prepare information to the public that is accessible. The standard is in the form of decisions or regulations, that there are limitations to the restrictions, is accountable, has measurable impacts, and has prepared mitigation of impacts. Most importantly, the government decisions or regulations must have a root in a bill or law.

“The government is given authority, so the public must be able to hold them to account, and actions that can be held accountable are decisions that can be questioned legally. Press releases can be made by anyone, so it is not legal liability,” Herlambang continued.

Herlambang also criticized the legal basis used by the government to terminate the internet access, which is Article 40 of the ITE Law. According to him, looking from human rights perspective, the restrictions are only for infringing content, not for internet blocking. In addition, interpreting Article 40 of the ITE Law paragraph (2) letters (a) and (b), must be done systematically and interrelated. Both refer to content filtering, and does not include disconnecting the network.

If “national security” is cited as the reason to limit human rights, based on Article 4 paragraph (3) and 19 paragraph (3) of the ICCPR the standard requirements need to be met are longer and more stringent. First the government must notify the United Nations, then determine the emergency situation that it threatens the national security.

Meanwhile, Oce explained the lawsuit which also sued the President of the Republic of Indonesia for the action taken by the Ministry of Communication and Information is appropriate. He refers to the logic construction built into the ITE Law that the government includes the president and ministers in the mandate relations.

Likewise in the logic of Law 30/2014 on Government Administration. Oce said, a superior from an official who made a decision or action, was also given the burden to take certain actions or decisions in the form of corrections or confirmation. For example, the superior can take administrative efforts in the form of administrative appeals. He said, if the superior officials did not take actions or made decisions, then it is also in the scope of action or decision made.

In addition, Supreme Court Law No. 2/2019 requires an objection to the extent of administrative appeals against PMH (the act against the law) by the government before making a lawsuit at PTUN (The State Administrative Court). The effort was carried out in the hope that it would be sufficiently solved administratively.

“What I see is the supreme court law expects an administrative settlement in the government level. So there is a multi-level logic. First do the objection to the official concerned, then to the superior. But if this function does not work, then of course the court will take over. At the court, when the administrative efforts fail, the logic is both the official and his superior can be sued in court,” he continued.

Furthermore, Oce also considered that the government was wrong in using Article 40 of the ITE Law to terminate internet access. He said, Article 40 paragraph (2) letters (a) and (b) are a unity that must be interpreted in a related manner. Judging from the article’s construction, the authority possessed by the government is limited to access to documents or electronic information, not the internet as a whole.

In Article 40 paragraph (2) letter (b), the type of documents and electronic information that can be restricted is limited to content that violates the law. Thus the implications of the government action to terminate internet access also have an impact on information or electronic documents that don’t violate the law, such as news produced by the press.

“The limitation is allowed, but only to documents and electronic information. But the type of documents and information are also restricted only to those which have violated the law. There is a possibility of abuse of authority by the government when it is used outside of what the law stated,” Oce said.