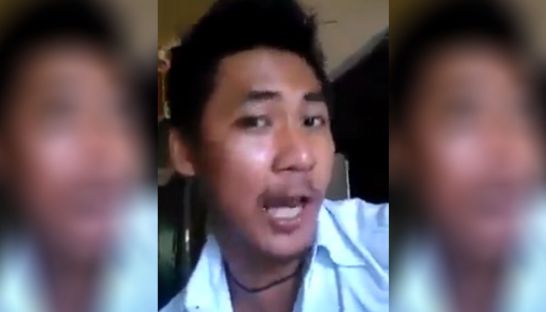 Huy Oudom, 29,  a Kampong Speu resident was charged with “incitement” on Saturday by the Kratie Provincial Court over a video on his facebook page from 2013 of him singing a song criticising Prime Minister Hun Sen’s policies.

In the video, Huy Oudom, 29, accuses Hun Sen in song of giving away Cambodian land to the yuon – an often derogatory term used for people of Vietnamese descent – and for exploiting the natural resources of the country.

“He takes the power for only himself and is not fearful of the people, and this is too much. And you should stop doing this because you are born as Khmer but behave like a dog – a useless dog,” he sang.

Oudom was arrested on Friday in Kratie province and charged the next day under articles 494 and 495 of the Criminal Code, which both relate to “provocation to commit crimes”, by Kratie Provincial Investigating Judge Than Khung. He is currently being held in provincial prison.

But Oudom later apologised for his infraction and attributed his actions to his youth. His apology, also posted to Facebook, consisted of a song aimed at the opposition party. “I am very ashamed that I insulted uncle [Hun Sen], and the opposition party always incites [people] to insult uncle,” he sang.