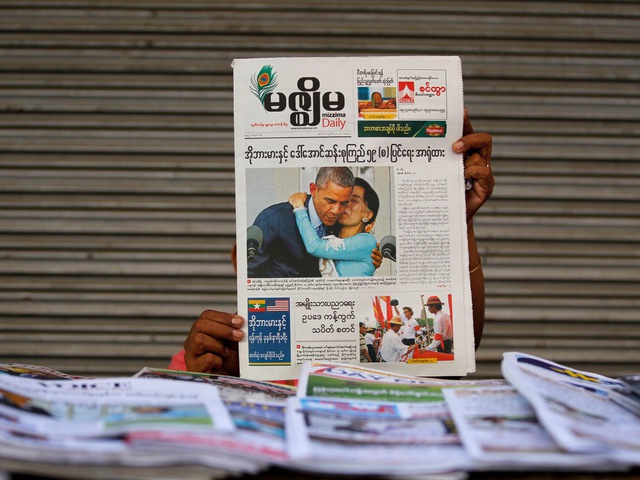 A Mizzima columnist and two editors were granted bail on Thursday [June 23, 2016] after prosecutors moved forward with a case targeting Mizzima over a December 31, 2015 column asserting that Eleven Media’s coverage of a government-backed organisation involved in peace negotiations between defence forces and armed ethnic groups “distorted” the organisation’s image.

If convicted, columnist Sithu Aung Myint, Mizzima Editor-in-Chief and Managing Director Soe Myint and the editor-in-charge of Mizzima’s Myanmar edition, Myo Thant, face fines of 5 million to 10 million Kyats (approx. €3,850 to €7,700) and one to three years behind bars if they are unable to pay.

They are charged under a law that prohibits “creating, modifying or altering of information or distributing of information created, modified or altered by electronic technology to be detrimental to the interest of or to lower the dignity of any organization or any person”.

IPI Director of Advocacy and Communications Steven M. Ellis said the case “appears to be an attempt to make an end run around Myanmar’s News Media Law, which is specifically intended to address this type of complaint”. He urged prosecutors to drop the case before the next hearing, scheduled for July 7.

“This is the wrong law and the wrong venue,” he said. “Cyber-crime provisions are intended to prevent criminal abuse of new technologies, not target unwelcome speech. Allowing the latter, an increasing trend in a number of countries, upends systems carefully calibrated to allow media outlets to continue performing their vital public watchdog role while sill allowing grievances against those outlets to be heard. This criminal case, if it goes forward, risks setting a dangerous precedent.”

Eleven Media Group Chief Reporter Marn Thu Shein filed a criminal complaint under the Electronic Transactions Law over a column by Sithu Aung Myint titled “MPC or an organization distorted by some media”. Published in Mizzima’s online edition, the piece referred to accusations reported by Eleven Media against the Myanmar Peace Center, which was dissolved in March.

Mizzima maintains that the column at issue is not actionable because it merely expressed the author’s opinion and did not identify Marn Thu Shein by name. The outlet also argues that Myanmar’s News Media Law governs in cases of alleged defamation by licensed media outlets. According to Mizzima, the complaint should first have gone before the country’s Press Council, which is empowered to mediate disputes between parties before they are referred to court.

Instead, police referred the matter to the Ministry of Transport, which authorised the criminal case. If the case proceeds under the Electronic Transactions Law, Mizzima argues, “this will seriously undermine the role of the Myanmar Press Council” and its ability to function as intended. It would also deny Mizzima protections it argues it should enjoy for having complied with the News Media Law.

The case targeting Sithu Aung Myint is reportedly the 10th legal case by Eleven Media against the columnist in recent years. The outlet withdrew from the Press Council last year before it began operating citing concerns over whether the Council was sufficiently independent from the government.

In a recent statement, Marn Thu Shein said that Sithu Aung Myint “wrote such articles many times and we could not lodge a complaint to any organisation so as a last resort we had to a file case against them with the police”. The Eleven Media reporter continued: “We have no intention to cause them any grievance. We filed this case in defence of our media outlet and to remedy our grievances because he wrote articles based on wrong facts causing misunderstanding and [the reader to be] misled.”