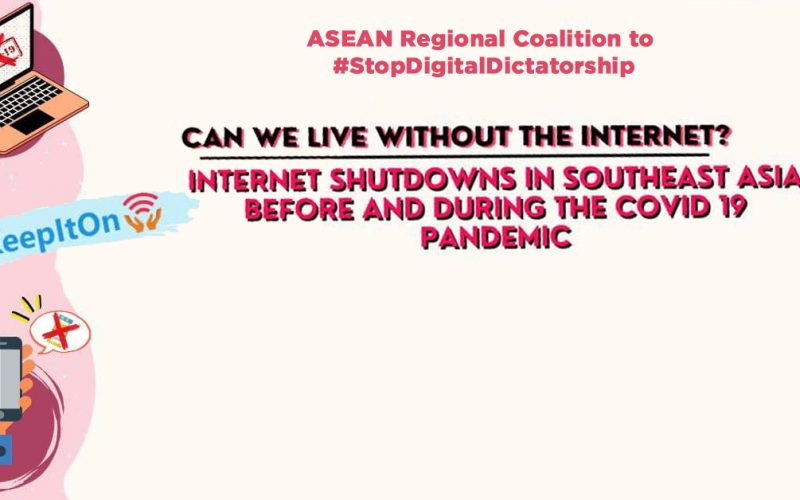 On Monday, August 2nd, 2021, The ASEAN Regional Coalition to #StopDigitalDictatorship held a webinar with the topic “Can We Live Without the Internet? Internet Shutdowns in Southeast Asia Before and During the COVID-19 Pandemic”. This webinar discussed one of the most salient problems in our digital age: internet shutdowns.

Several governments in Southeast Asia have disrupted internet connectivity or even cut off internet access prior to and amid the pandemic to crack down on free expression and control the flow of information. The implementation of internet shutdowns has been seen in Indonesia and Myanmar in recent years, restricting people’s digital rights and putting their lives in danger.

Below are important notes during the discussion:

Felicia Anthonio, Campaigner and #KeepItOn Lead from AccessNow basically argued that this internet shutdown needs to be a concern for people around the world because of its impact on people. At first, she mentioned the internet shutdown trend that occurred all over the world, especially during the pandemic. By 2021 (January-May), AccessNow her organization had documented 50 shutdowns in 21 countries.

They also noticed the trend that the government implemented an internet shutdown during elections to control information. Another interesting trend is that the government also blocks access to certain platforms such as Facebook, Twitter, Signal, etc. They also pay attention to cases of internet disruption that occur when citizens are protesting and when they are in conflict.

This internet shutdown policy greatly interferes with freedom of expression and the right to access information. Even more than that, in general this policy also affects education, health, and other social activities. Internet disruptions disrupt human life as a whole.

Herlambang P. Wiratraman, lecturer from Faculty of Law, Airlangga University, specifically explained what was happening in Indonesia. He explicitly stated that there is no legal basis in the Electronic Information and Transactions (UU ITE) to regulate internet shutdown. So far, the government has misused the legal interpretation, which has been challenged by civil society organizations (CSOs).

The government implemented this internet shutdown policy for several reasons: 1) spread of hoaxes that triggered the action; 2) to accelerate the restoration of security and order situation in Indonesia; 3) the high distribution and transmission of hoax, false news, provocations, racist hate speech and incitement. These reasons are problematic because there is no standard in determining these conditions.

Herlambang invites everyone to pay attention to the internet shutdown case from a human rights perspective by considering the following points.

First, the government has never listened to complaints from CSOs and Komnas HAM in this case. President Jokowi has ordered to revise the ITE Law to accommodate the many criminalizations of people who criticize. Unfortunately, instead of revising the verse, the Ministry of Communication and Information only issued guidelines for using the law. Second, there is no independent organization that monitors internet governance. Third, there is limited or even no standard setting for regulating the internet in protecting rights. It could lead to uncertainty and misused.

In general, Ramakrishna Padmanabhan, Postdoctoral Researcher at CAIDA explained how CAIDA uses Internet Outage Detection and Analysis (IODA) tools to monitor internet disruptions around the world. He emphasized that IODA detects full internet connection disruptions, not blocking on certain platforms (partial shutdown). IODA is open to the public so that anyone can use the data on their site.

In this webinar he demonstrates how to use IODA to observe near real-time monitoring results on internet connections in countries. In particular, he demonstrated how data visualization appears when we search for connection data in Myanmar in the period 27 January-10 February 2021.

An important note that emerges from this discussion is that the algorithm used in IODA is not for detecting reasons for internet interruptions. This is important to discuss because it is not uncommon for internet access to be lost due to natural factors such as the break in the submarine cable network due to shifting of the earth’s plates, etc.

Htaike Htaike Aung from Myanmar ICT for Development Organization (MIDO) shared her experience of the internet shutdown in Myanmar carried out by the military junta during the February coup, especially during this pandemic. This internet shutdown policy has very dangerous consequences because it makes many people living in Myanmar not aware that the country is facing a pandemic condition. Thus they also have problems in getting information about the virus and public health.

Htaike also shared the story of a shooting victim who was carrying medical equipment to serve residents. The condition of public health in Myanmar is very challenging because apart from being in a conflict area, it is also due to limited access to communication.

Currently even though the internet is not completely shut down, internet access is still poor and continues to deteriorate. Some access to social media was also blocked by the military. So, people can still access the internet today, but with full control of the military.

The biggest challenge today is the lack of transparency about why and how the internet shutdown policy was enforced in Myanmar. The regulations there do allow the government and military to shut down the internet under certain conditions. So it is very difficult for CSOs to take this case to court, as happened in Indonesia.

Alia Yofira from ELSAM emphasized an argument that Internet as an enabler of human rights. In a pandemic, the internet is also an important social determinant because people really need health information, such as vaccinations. She also emphasized that there is a pattern in the implementation of the internet shutdown policy, which is close to the government’s political activities. The internet shutdown in Papua, for example, occurred close to the government’s agenda to fight the Armed Criminal Group in Papua.

The internet shutdown that occurred in Papua had a severe impact because it made it difficult for health workers to input Covid-19 data. This condition also makes students living in Papua have to study face-to-face, or move to other places where internet access is available.

Alia mentioned three current challenges which are: 1) regulatory framework on internet censorship; 2) lack of transparency and accountability; and 3) lack of technical capability. Seeing these challenges, what can we do? She suggested the following things: 1) regulatory reform on internet censorship; 2) capacity building and collaboration with technical communities; and 3) doing international advocacy.

For full documentation of the webinar, watch the video below: