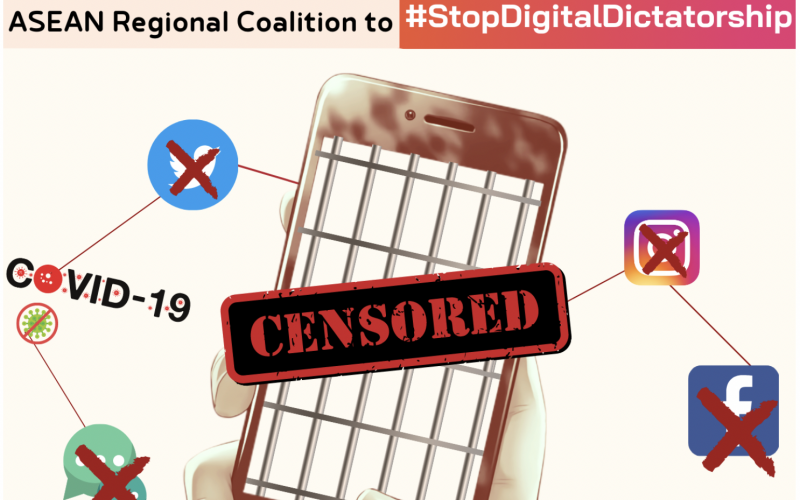 We call for an immediate repeal of a recent order for provinces to keep records of official social media channels and to enforce social media registration, as well as an end of an online monitoring special taskforce, aimed at controlling the spread of “fake news” concerning the COVID-19 pandemic. We condemn the Lao People’s Revolutionary Party (LPRP) Government for its attempt to impose a digital dictatorship on the rights and freedom of Lao people and free media to prevent them from critical reporting and free expression.

We call on the government of Lao PDR to uphold its international human rights obligations under Article 19 of the Universal Declaration of Human Rights (UDHR), and under Article 19 of the International Covenant on Civil and Political Rights (ICCPR) which protect the right to freedom of expression of individuals and the press, including their right to seek, receive and impart information through the media, including through electronic media.

We denounce the government’s failure to comply with its international human rights obligations and the weaponization of restrictive laws. Of particular concern are Articles 8 and 62 of the 2015 Law on Prevention and Combating Cyber Crime, which grant unrestricted power conferred on the authority and vaguely worded crimes, and the problematic Media Law, which greatly undermines the independence of the media and stifles free expression online. We are further concerned about some Constitutional provisions: articles guaranteeing basic human rights to freedom of expression and press freedom are undermined by other articles imposing vague limitations on these freedoms in the name of protecting national interests.

On 20 May 2021, the Ministry of Information, Culture and Tourism ordered the departments of Information, Culture and Tourism in all provinces to keep records of official social media platforms including websites, online news pages and Facebook pages and to forward them to the Mass Media Department, under the guise of combating “false information” during the COVID-19 pandemic. It also encouraged its provincial departments to supervise the registration of social media platforms. The notice stated that unregistered platforms would not be allowed to publish information or news under the Media Law and continuous operation would also face legal consequences. It was claimed that registration aims to regulate social media and ensure that information and news posted on social media platforms are accurate. Officials highlighted punishment for the circulation of fake news and misinformation causing loss or damage through social media under the 2015 Law on Prevention
and Combating Cyber Crime.

The next day, on 21 May 2021, the Ministry of Public Security issued a notice indicating that a special taskforce has been set up to surveil, trace and respond to “illegal online media” and “fake news” posted by both domestic and international actors. The taskforce is composed of officials from the Mass Media Department, Ministry of Information, Culture and Tourism, as well as public security and police departments. This new development is consistent with the Lao Prime Minister’s speech in which he warned of people who “use social media to commit crimes, to destroy the country and to cause any disorder by undermining the unity, creating misunderstanding and creating any antagonistic parties in the country” and called on all security forces to make efforts against such actions.

On 17 September last year, the Minister of Information reiterated a notice asking “any individual, legal entity, state or private sector that continues to publish and provide information to the public via social media” to register with the government or be punished in line with the laws of the Lao PDR. The warning corresponded to an earlier directive issued on 19 July 2019, requesting the administrators of news outlets on Facebook and other social media platforms to register their accounts with the Ministry. Justifications have been repeatedly invoked on grounds of “fake news and disinformation” on social media, even before the breakout of the pandemic. Reported in October 2020, 20 Facebook pages, including Tholakhong, Inside Laos, and Lao Youth, have been registered while some news sites such as the Lao-Thai Facebook page have yet to comply with the
order.

This move follows Lao people’s increased reliance on the Internet and social media – rather than state-owned media – to share information and seek uncensored news in recent years. After the 2018 Xe Pien-Xe Nam Noy dam collapse – a widespread environmental and human-made disaster which impacted thousands of people – while state-controlled media were vague and inconsistent in their reporting of the damage, social media users reported on and checked most of first-hand information.

In a bid to discredit critical online information, the Prime Minister warned all Lao citizens not to believe the alleged misinformation of the foreign media and social media and instead to only trust information shared by state-owned media instead. Inspired by the #MilkTeaAlliance and pro-democracy movements in Asia, Lao online users launched a rare online campaign with the hashtag #ຖ້າການເມືອງລາວດີ (#IfLaoPoliticsAreGood) on Twitter in October 2020. The hashtag has been used hundreds of thousands of times by netizens to criticize bad governance.

The reinforcement of social media platforms’ registration and severe control of online information are another reflection of the digital dictatorship in Laos, which violates the digital rights of individuals, especially freedom of the press, freedom to access information, and freedom of expression. The crackdown on dissents can be exemplified in the case of Houayheuang Xayabouly, also known as Muay, an environmental activist and woman human rights defender who repeatedly used Facebook to criticize the Lao government’s undemocratic actions and who is currently in prison serving a 5-year prison sentence for distributing anti-state propaganda.

On 23 November 2018, the UN Human Rights Committee expressed its concerns in its Concluding Observations over the state’s absolute control over media aiming at ensuring that TV, radio and printed publications adhere to and reflect the government policies. In January 2020, during its 3rd Universal Periodic Review (UPR) cycle, Lao PDR received 24 recommendations relating to freedom of opinion and expression and 7 recommendations calling for respect of press freedom. On 3 June 2020, UN High Commissioner for Human Rights Michelle Bachelet, expressed her alarm at the crackdown on freedom of expression during the COVID-19 through the criminalization of alleged “fake news” and online media to restrict legitimate speech and free flow of information.

Therefore, the ASEAN Regional Coalition to #StopDigitalDictatorship calls on the Lao government to:
● Ensure that measures to combat disinformation and misinformation are in line with international human rights obligations and the rule of law;
● Strengthen protection of independent investigative journalists or media professionals who expose rights violations;
● Refrain from broadly applying and interpreting criminal provisions to punish legitimate expression and the media in the context of the COVID-19 pandemic;
● Repeal the above-mentioned orders and refrain from forcing online media outlets to register with the authorities;
● Guarantee transparency and access for all persons in Lao PDR to information, particularly where such information relates to the public interest and impacts upon the individual’s rights to expression, information and public participation, by adopting a law to enable the provision of such access;
● Repeal or amend laws and regulations that restrict freedom of expression, independent media, and access to information, including but not limited to the Law on Prevention and Combating Cyber Crime and the Media Law, to bring them in line with Article 19 of the UN Declaration on Human Rights (UDHR) and of the International Covenant on Civil and Political Rights (ICCPR);
● Stop using the excuses of COVID-19 pandemic and “fake news” allegations as excuses to restrict online information and free media;
● End the weaponization of constitutional provisions such as Article 23 of the Constitution, to limit media activities contrary to vague and overbroad provisions of “national interests” or “traditional culture and dignity.

For more recommendations on how to protect free expression while combating disinformation during the COVID-19 pandemic, in line with international human rights laws, please refer to Access Now’s 2020 report Fighting misinformation and defending free expression during COVID-19: recommendations for states. To join our regional campaign to #StopDigitalDictatorship in Southeast Asia, and to contribute to our efforts to restore digital democracy in the region access our online campaign at: https://www.manushyafoundation.org/stop-digital-dictatorship-campaign