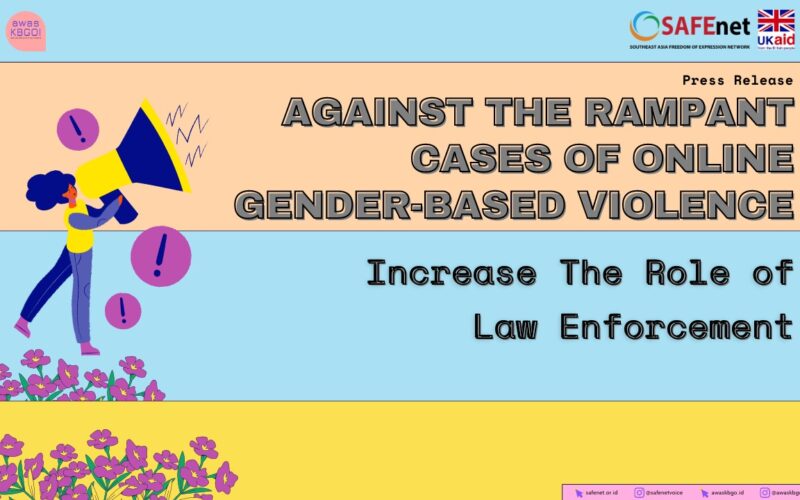 The increase in cases of online gender based violence (OGBV) was recorded significantly during the COVID-19 pandemic in 2020. In their 2021 Annual Report released March 5th, 2021, Komnas Perempuan stated that they have received as many as 940 OGBV cases in 2020, which has shown an increase of more than 3x from the 281 cases recorded throughout 2019. LBH APIK Jakarta is also facing a surge in OGBV cases of 307 cases throughout 2020, which is clearly an increase compared to 17 OGBV cases in the form of sexual violence facilitated by digital technology received in 2019.

In line with Komnas Perempuan and LBH APIK Jakarta, SAFEnet through its Digital At-Risks (DARK) Subdivision saw an increase in case complaints related to the spread of non-consensual intimate content by almost 400%. Throughout 2019, SAFEnet assisted 45 complaints related to the dissemination of intimate non-consensual content, this number increased to 169 complaints only for the March-June 2020 period which was the beginning of Large-Scale Social Restrictions (PSBB) and Work from Home as part of the handling of COVID-19 .

One of the prominent challenges of the increase in the OGBV cases is that the victims still have doubts about seeking justice through the legal process and the situation when facing law enforcement officials, the reasons among other are due to a lack of understanding of the legal articles that can protect them, and instead what visible in the public is that the victim is easily criminalized.

In addition, another challenge that stands out is the lack of alertness of law enforcement officials in handling OGBV cases, especially when the perpetrator uses anonymous features on social media to commit acts of violence, which is due to the lack of resources, such as access to tracking tools or digital forensics and uneven human capacity.

“There are many challenges faced by OGBV victims when seeking justice through the legal process, and these challenges come from various sides, from the situation of the majority of the public who are not yet aware of the law, to law enforcement officials who have their own challenges, such as limited access or resources,” said the Head Digital At-Risks SAFEnet Subdivision Ellen Kusuma.

To answer this challenge, SAFEnet through the Awas KBGO initiative which received funding from the Digital Access Programme British Embassy Jakarta published 2 guidebooks, namely Legal Aspects to Charge the Perpetrators, a guidebook related to threats and the dissemination of intimate non-consensual content, as well as Tracking OGBV Perpetrator on the Digital Platform guidebook for victim and law enforcement.

She elaborated, “We hope the publication of these two guides can help ordinary people to be more familiar with the legal process, and also know that there are various articles that can help KBGO victims, especially those facing threats and the spread of intimate non-consensual content.

Digital Access Programme Lead for British Embassy Jakarta, Christopher Agass said, “In the UK, just as in many countries around the world, the COVID-19 situation has amplified already existing risks associated with issues such as domestic violence, abuse, and online crime.

The UK Government provides help and support in a variety of different ways to deal with these interlinked issues, involving the Police, online support and campaigns, helplines and support centres. As an example, the campaign Ask for ANI (Action Needed Immediately) provides a safe space and support for victims. The UK has also recently finished a call for evidence stage as part of a closed consultation exercise connected to the development of the Violence against Women and Girls Strategy 2021-2024, which will underline risks associated to Online Gender Based Violence as an increasingly concerning crime type. The UK has also set in motion an Online Harms White Paper, to underpin our work in this area.”

Christopher expressed, “The UK’s Digital Access Programme here in Indonesia is pleased to be supporting SAFEnet and the UK’s Get Safe Online to focus support on Online Gender Based Violence and cybersecurity awareness raising and risk mitigation. With the significant increase in OGBV cases during the pandemic, AwasKBGO platform can provide the guidance and support for victims entering legal procedures, and contribute to reducing the extent of this particular online harm.”

Legal Aspects to Charge the Perpetrators guidebook explain the various elements of action that usually accompany threats and the non-consensual dissemination of intimate content followed by existing law articles that can be used by victims to charge the perpetrator. The Tracking OGBV Perpetrator on the Digital Platform guideline elaborate on the police’s authority to track down the perpetrator by requesting the information needed from the Digital Platform, such as Facebook and Instagram, Google, Tik Tok, Twitter, and WhatsApp. These two guides are available for download and complement the various guidebook previously published by Awas KBGO at https://awaskbgo.id/publikasi.

The launch of these guides was carried out in conjunction with the Webinar “Encouraging The Public to Increase The Role of Law Enforcement Against The Rampant Cases of Online Gender-based Violence” on March 10, 2021 which can be watched on the YouTube channel Awas KBGO.

“So far, victims are in an unfavorable situation when seeking justice through legal channels. We must change this, so that victims can get the support they need and are more empowered, knowing what efforts can be pushed to law enforcement officials. The public must be encouraged to be more courageous in using legal channels, and the police must improve their performance in dealing with OGBV,”said Ellen.

The publication of the guidebooks also received support from relevant multistakeholder, including from the Ministry of Women’s Empowerment and Child Protection, Komnas Perempuan, as well as NGOs, Legal Aids, and related communities, such as the Advocate Collective for Gender Justice (KAKG), LBH Jakarta, LRC KJHAM Semarang.