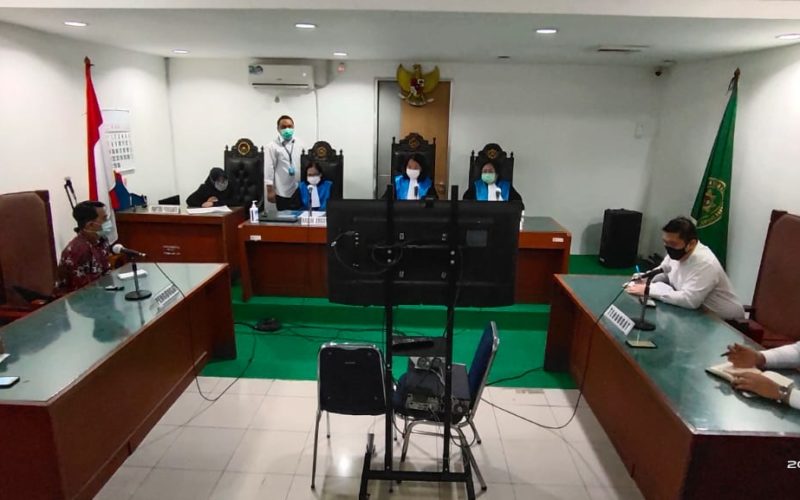 Jakarta PTUN Judge Council, Wednesday, June 3, 2020, decided the case for a lawsuit to terminate internet access in Papua and West Papua. The judge stated that the actions of Defendant I (Ministry of Communication and Information) and Defendant II (President of the Republic of Indonesia) which slowed down and cut off internet access in Papua and West Papua in August and September 2019 were an unlawful act by a government agency and / or official. The judge also sentenced the Defendant to pay the court fee.

This decision was read out by Chief Judge Nelvy Christin SH MH, judge member Baiq Yuliani SH, and Indah Mayasari SH MH. This lawsuit was filed by the Press Freedom Defender Team consisting of AJI Indonesia, SAFEnet, LBH Pers, YLBHI, KontraS, Elsam and ICJR. In the lawsuit filed last November 2019, the plaintiffs asked the judge to declare the government’s actions to restrict the internet in August and September last year against the law.

In the session, the Ministry of Communication and Information and the President of the Republic of Indonesia stated that the lawsuit filed by civil society organizations had expired, had no legal standing, obscure libel and error in persona or either party. The judges in their decision concluded that the lawsuit filed by AJI and SAFEnet was still within the grace period. Both institutions were also considered to be eligible to file a lawsuit with the legal standing lawsuit mechanism. The judge also stated that the lawsuit was clear and not vague. The matter of a lawsuit against the President of Indonesia, said the Judge, is not an error in persona. The President is considered to be sued for not exercising control and correction of his subordinates in the internet slowdown and shutdown.

The judges considered that the act of terminating internet access violated a number of statutory provisions. Among other things, Article 40 paragraph (2a) and (2b) of the Electronic Information and Transaction Law, which forms the legal basis of the Ministry of Communication and Information slowing down and shutdown the internet. The panel of judges considered that the authority granted in this article was only for terminating access or ordering the electronic system operator to terminate access to electronic information and or electronic documents that are “against the law”. “The interpretation of restrictions on the right to internet as formulated in Article 40 paragraph (2b) of the ITE Law only applies to electronic information and / or electronic documents that have content that violates the law and does not include termination of internet network access,” said the panel of judges in their decision.

In addition, the panel of judges also stated that the reason for the discretion used by the Ministry of Communication and Informatics to slow down and block the internet was considered not to meet the requirements as regulated in Government Administration Law 30/2014. The discretionary arrangement in the Administrative Law is a cumulative unit, not an alternative, that is to; streamlining the administration of government; fill the legal vacuum; provide legal certainty; and overcome the stagnation of government in certain circumstances for public benefit and benefit.

The judge also considered that the reason the Ministry of Communication and Information used discretion because of the legal vacuum, was also incorrect. Because, in policies that are limited to human rights, such as restrictions on internet blocking, this is only allowed by law, not by law which is lower than that. Actually there are laws that can be used as a basis for limiting rights, namely the Law on Dangerous Conditions. But the government did not use the law in dealing with the dissemination of hoax information in the Papua case. The judge also considered that the termination of internet access was not in accordance with the human rights restrictions set out in the Constitution and a number of other human rights conventions.

The Plaintiff’s Attorney Team, Muhammad Isnur, appreciated the decision of the PTUN judges because they made many human rights considerations in their consideration. Isnur added, with the Jakarta PTUN ruling declaring the internet slowdown and shutdown as Unlawful Acts, it also opened up the possibility for those who felt aggrieved by the policy to sue and ask for compensation. “Of course, after being legally binding,” he said.

The slowdown and internet shutdown was carried out by the Ministry of Communication and Information following the riots in Papua, August – September 2019. The incident was triggered by racist acts and violence against Papuan students, among others, in Malang, August 15, 2019, in Surabaya on August 16, 2019. Under the pretext of preventing the spread of false information, the Ministry of Communication and Information slowed down and then shutdown the internet in Papua.

The verdicts of the judges are complete and verbatim, as follows:

In Exception:
Stating the exception of Defendant I and Defendant II are not accepted.

were an unlawful act by a government agency and / or official.