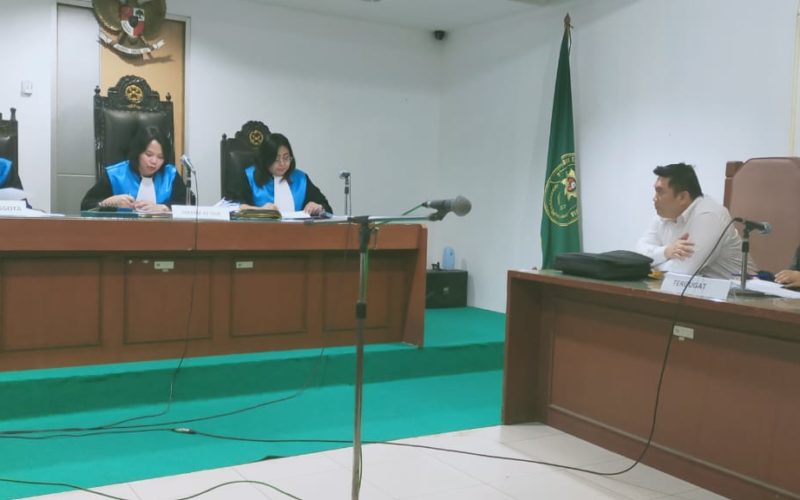 Wednesday, January 22, 2020 at PTUN Jakarta, the first court of the internet shutdown lawsuit filed by the Press Freedom Defender Team – which consisted from the Alliance of Independent Journalists, SAFEnet, YLBHI, LBH Pers, KontraS, Elsam, and ICJR – began without the presence of one of the defendants, President Jokowi. The absence of President Jokowi was not accompanied by information to the PTUN judges so that the agenda of reading the defendant’s response to the lawsuit submitted by the Press Freedom Defender Team was only used to hear the answer from the MICT only.

In today’s PTUN trial, Jakarta PTUN judge read out the object of the lawsuit in question, namely the throttling bandwidth carried out on 19-20 August 2019, the termination of internet access from 21 August to 4 September 2019, and continued termination of internet access from 4 to 11 September 2019. On these basis, legal counsel from AJI and SAFEnet filed demands that President Jokowi and the Minister of Communication and Information were guilty of not obeying the law and violating the principles of good governance.

“This trial is the first court of a lawsuit against President Jokowi through the Administrative High Court mechanism. This session was also important because we questioned the slowdown in access that occurred, followed by the termination of internet access in Papua and West Papua in 2019. The defendant is the Minister of Communication and Information, but also President Jokowi who is the supervisor of the Minister of Communication and Information as a party who should know and be able to intervene in the actions taken by the Minister of Communication and Information, “said Muhammad Isnur, attorney for the Press Freedom Defense Team. “The issue of internet disconnection policies in Papua then shows that the government has acted arbitrarily in making decisions. Indonesia is a state of law so that this action if not based on applicable law and only based on requests from the security forces, then it can be said as an act breaking the law.”

Putri Kanesia, one of the attorneys of the Press Freedom Defenders Team, also added, “This lawsuit can be an important lesson that in the future the state must not arbitrarily implement a policy of slowing down the bandwidth just because of reasons to avoid hoaxes. This restriction has never been tested so that it has an impact on the absence of state accountability and is detrimental to the public, especially journalists who work to ensure the truth of information about what is really happening in Papua, can be known to the public. “

“The loss of one of the defendants, President Jokowi, in the first court showed that this problem was still considered not serious. Even though the problem of internet blackouts is an act that violates international law,” said Executive Director SAFEnet Damar Juniarto.

A joint UN statement in 2015 stressed that based on the Human Rights Act, blackout of the internet cannot be justified. No matter what the form of restrictions and enactments are and whatever the reasons are, restrictions on internet access and blocking of social media are never worth the problems they cause. Even the reasons for national security and the fight against “false news” are not enough to answer the true impact of cutting access to information on millions of people. Network and social media restrictions also limit press freedom and freedom of opinion and can have a greater economic impact.

Even the UN Special Rapporteur on freedom of expression David Kaye said that blackout Internet access is a violation of international law. This action harms citizens’ access to public services. Most importantly, the violation has robbed people of their basic rights to communicate with friends and family, especially when public security has been compromised.

If the government really cares to maintain public order when conflict events occur, the government that works in good faith will choose to increase transparency, encourage the dissemination of accurate information, actively expose false news, and respond directly to complaints that cause criticism and unrest. Instead it does not blackout the internet or restrict access to the internet.