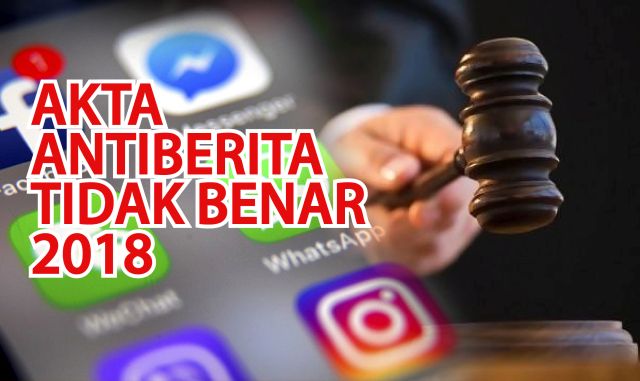 The first anti-hoax legislation in the world, Akta AntiBerita Tidak Benar 2018 (Akta 803), was officially enforced on April 11, 2018. It is informed through the website of the General Prosecutor of Malaysia.

According to this legislation, “fake news” covers any news, information, data, and reports that are partially or entirely wrong, whether in the form of articles, visual or audio recordings or in other forms that may reflect words or ideas.

The offenses set out under Article 4 of Akta 803 are to withhold, offer, publicize, and otherwise, fake news or publications containing fake news.

Not long after the Akta 803 was enforced, the Johor Police have used this law to investigate fake news about Tunku Mahkota Johor (TMJ) Tunku Ismail Sultan Ibrahim reportedly providing assistance at several supermarkets on April 12, 2018. The message shares information that TMJ will provide up to RM200 in Pontian and some other districts in social media, causing hazy situations in some supermarkets such as Pontian Econsave Supermarket.

Previously SAFEnet feared the Akta AntiBerita Tidak Benar 2018 (Akta 803) was intended to limit freedom of speech; that the Malaysian government is in a hurry in giving birth to this law; that this law is too harsh and is meant to prepare for Malaysia’s general election; legal redundancy; unclear definition of fake news; excessive punishment; unclear who defines fake news and selective prosecution.