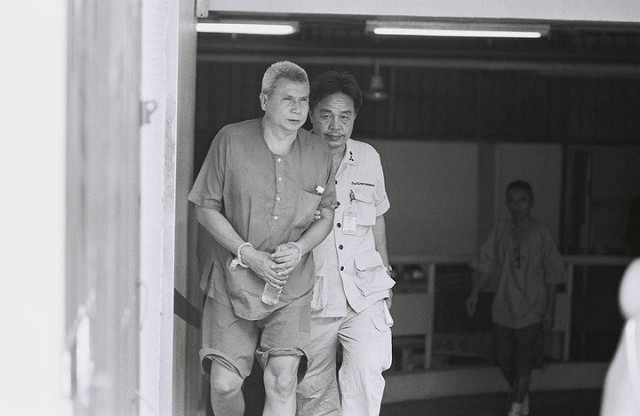 The sentence, however, was reduced by one third after Thanat pleaded guilty to three years and four months in jail.

In June 2016, the Criminal Court sentenced Thanat to five years’ imprisonment for each of the three lèse majesté counts from two of his speeches deemed defamatory to the Thai monarchy which were publicized on YouTube and were online from late 2013 to 26 April 2014. As he pleaded guilty, the court then halved the sentence to seven years and six months.

Added up with the verdict from the Military Court, Thanat will be imprisoned for 10 years and 10 months in total.

According to Thanat’s defence lawyer, he will soon request for a royal pardon.

Thanat was indicted on two lèse majesté charges for defaming the monarchy in speeches at two anti-establishment red-shirt rallies held by Kotee Red Guard in November 2013. While the first case was processed by the Criminal Court, the second case was being handled by the Military Court as the YouTube clip of the speech was available online until 27 June 2014, after the coup d’état.

Thanat recanted his earlier statement and pleaded guilty to the lèse majesté charge in May 2016 after being imprisoned for almost two years. He told Prachatai then that he just wanted to case to end as soon as possible.

Prior to his arrest, he was charged with defying the junta’s National Council for Peace and Order (NCPO) order to report to the military. He was then released on bail.

Thanat became seriously engaged in politics in 2010 before the red-shirt rally was violently suppressed by the government. He decided to become one of the red-shirt leaders, which meant losing income from his concert tours. He used to do 20-25 concerts per month but after he took part in the movement, most were cancelled.