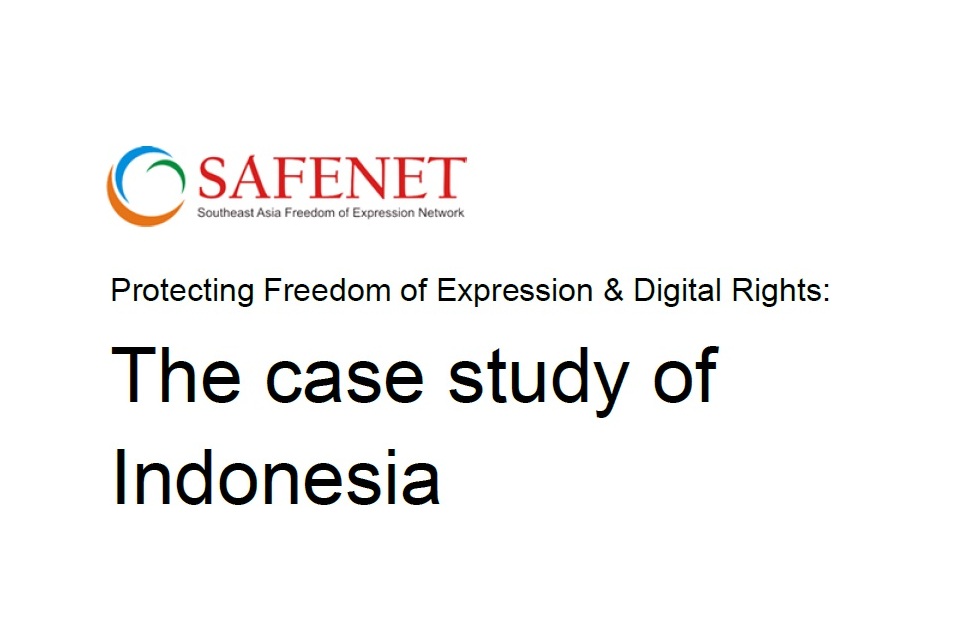  Freedom of speech
From 2008 to 2014, there have been at least 74 people sued under the ITE Law, 92% of them sued for online defamation under Article 27 point 3, 5% for blasphemy, 1% for making online threats.
36% of the cases were because they criticized the government (e.g., mayor, regent, and institution) or reported possible corruption, while the other 40% cases were because they used the internet/social media to express their dissatisfaction over services provided.

In March 2015, the number of reports rose to 85 people. The trend shows at least 4 people being sued each month for online defamation.

1. Muhammad Arsyad – Corruption Eradication Activist – Makassar
For expressing his opinion by posting “Don’t be fear of threats and don’t choose the brother of a corruptor” (sic) on his own BlackBerry Messenger (BBM) status, Arsyad went to jail for 100 days. During the trial, threats were leveled against him, but the judge set him free. His case represents the ongoing situation of “speakers’s crisis” where speakers like Arsyad now are afraid to express their criticism about the local government through online media.

2. Deddy Endarto – Humanist – Mojokerto
Deddy was sued by the owner of a steel factory for defamation right after he gathered votes for an online petition through change.org website to stop the steel factory from opening a new plant in the historical site of Trowulan. He is currently on trial and still fighting for his right to express his opinion.

3. Apung Widadi – Anti Corruption Activist – Jakarta
Apung created a post about the corruption scandal inside Indonesia’s national soccer association on Facebook in a secret group discussion. The association sent the police to catch him and put him on trial. He is now still in hiding.

4. Florence Sihombing – College Student – Yogyakarta
Florence criticized the city and the people of Yogyakarta on her Path account, which resulted in her being on trial for defamation. The prosecutor asked the judge to sentence her with 6 months jail time. At the time of writing, the judge has yet to decide on her case.

5-6. Agus Slamet & Udin – Anti Corruption Activist – Tegal
Agus and Udin were held in custody after the mayor of the city of Tegal, Siti Mastiah, sued them for defamation. At the time of writing, they are awaiting trial.

7. Ronny Maryanto Romaji – Head of Local Election Supervisory Committees – Semarang
Ronny monitors elections for instances of election law violations, including money politics. In 2014, a politician suspected to be corrupt sued him for defamation because the online media reported on Ronny’s investigation against him. At the time of writing, the police is still examining the case.

8. Dian Rustya – Blogger – Tuban
Dian criticized the public health center in her town and as a result she was sued by the head of the center. At the time of writing, the police is still examining the case.

9. Fadhli Rahim – Civil Servant at Tourism Agency – Gowa
Last February, Fadhli was sentenced to jail for 8 months because he chatted with a fellow high-school alumni on his LINE chat app about the mayor of Gowa district.

10. Muhammad Arsad – Civil Servant at Local HRD Agency – Selayar
Arsad was sentenced to 2 years in prison for sending an SMS message to his supervisor, Selayar Regent Syahrir Wahab, reminding him that the due process on corruption is applicable to Selayar’s administration.

 Privacy
The Citizen Lab’s report on the spy software FinFisher found it to be present at 5 different telecommunication companies. We also received an anonymous tip that the National Intelligence Board (BIN) has planted FinSpy, a variant of FinFisher, to surveil their targets.

One Reply to “Protecting Freedom of Expression & Digital Rights: The case study of Indonesia”