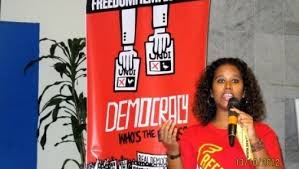 Lena Hendry is a Programme Coordinator for Pusat KOMAS, a human rights organisation which works to empower indigenous peoples, urban poor, workers, and civil society organisations through the use of popular media.

On 21 February 2017, the magistrate’s court convicted Lena Hendry for screening the documentary, “No Fire Zone: The Killing Fields of Sri Lanka”, without the permission of the official film censors. She was charged under Section 6(1)(b) of the Film Censorship Act 2002, which carries a jail term of up to three years or a fine of up to RM30,000 or both. The court will decide on the sentencing on 22 March 2017.