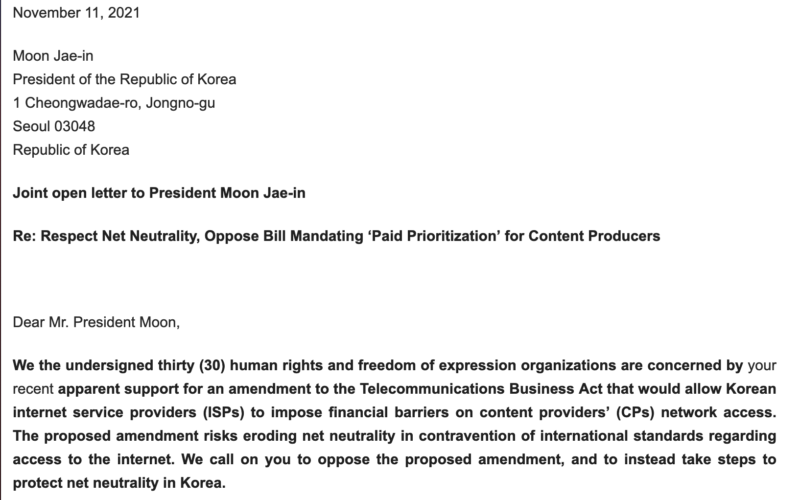 The letter noted that this remark may promote a recent Kim Youngshik bill that codified the concept of ‘network usage fee’ for the first time and imposed such fee on content providers. The legislative intent part of the bill makes clear its intent to target those content providers who are not receiving internet access services from the ISPs and hold them liable for paying for having their contents made available to the ISPs’ users.  This means that ISPs can discriminate data by whether or how much the sender has paid.  Such bill will be the world’s first that not just allows but mandates ‘paid prioritization’. The letter again emphasized the economic importance of net neutrality for ordinary people in disseminating messages to many at the same time, noted its entry into international human rights standards via the UN Special Rapporteur on Freedom of Expression and the UN Human Rights Council and the ban on ‘network usage fee’ in EU’s and US’s net neutrality regulations, and called for abolition of 2016 Sending Party Network Pays rule and 2020 CP Service Stabilization law.

Open Net Association also opposes the Chun Hye-Sook bill that on surface bans ‘discrimination’ but is clear in its legislative intent to impose on content providers not receiving internet access services some sort of fees for accessing ISP’s customers.

We the undersigned thirty (30) human rights and freedom of expression organizations are concerned by your recent apparent support for an amendment to the Telecommunications Business Act that would allow Korean internet service providers (ISPs) to impose financial barriers on content providers’ (CPs) network access. The proposed amendment risks eroding net neutrality in contravention of international standards regarding access to the internet. We call on you to oppose the proposed amendment, and to instead take steps to protect net neutrality in Korea.

The proposal, if passed, would impose the world’s first law mandating paid prioritization by requiring content providers like Naver, Kakao, Netflix, and Google to pay Korean ISPs termination fees based on network usage in order to have their content be sent to the ISP’s customers. This amendment comes a year after the Telecommunications Business Act was last revised to include vaguely defined requirements on content providers to ensure stable internet service, foreboding imposition of some sort of burdens on content providers. Since 2016, Korea has already imposed the world’s first mandatory Sending Party Network Pays (SPNP) rule albeit only among ISPs, where ISPs charge one another for sending data to other ISPs resulting in high internet connectivity charges for content providers.

The new amendment allows ISPs in Korea to restrict access to content based on how much money has been paid by the sender or to block traffic from CPs unable to pay network usage fees. This would contradict the principle of net neutrality, which protects internet users’ rights to access content, applications, services, and hardware of their choice by ensuring all data is treated without discrimination. The plurality and diversity of expression and information on the internet risks being stifled if ISPs are allowed to use their control of network infrastructure to slow, block, or prioritize content depending on whether money has been paid for its delivery.

Net neutrality principles have been upheld as an international human rights standard. In particular, in his 2017 report to the Human Rights Council, the Special Rapporteur on the Freedom of Expression stated that “the State’s positive duty to promote freedom of expression argues strongly for network neutrality in order to promote the widest possible non-discriminatory access to information.” Speaking specifically in regards to paid prioritization, as now proposed in Korea, the Special Rapporteur explained that paid prioritization schemes give preferential treatment to certain types of traffic over others for payment, which undermines user choice and forces them to engage with content that has been prioritized without their knowledge. In its 2021 resolution on the promotion, protection and enjoyment of human rights on the Internet, the UN Human Rights Council further called on States to “ensure net neutrality” and “to prohibit attempts by Internet access service providers to assign priority to certain types of Internet content or application over others for payment or other commercial benefit.”

From a comparative perspective, such practices as now proposed in Korea have previously been banned in the United States under the Federal Communications Commission’s (FCC) 2011 Preserving the Open Internet order and that ban was also included in the 2015 Protecting and Promoting the Open Internet order . Even though these rules were revoked in 2017 under the Trump administration, the Biden administration in 2021 issued an executive order to restore them and their reimposition is now under review by the FCC. In Europe the Body of European Regulators for Electronic Communication already rejected a similar proposal in 2012. When the European Union  adopted their Open Internet Regulation in 2015 that protects the principle of Net Neutrality union-wide, a similar decision was made by the European Parliament and the Council of EU member states to not establish a ‘Sending Party Network Pay’-regime that would charge termination fees..

Proponents of the amendment claim that content providers are “free-riding” on Korean ISPs and not paying their fair share, but in reality all users of the internet, including individuals and companies, are already paying for bandwidth and access to content delivery systems. Domestic content providers in Korea are already paying high fees to connect to domestic ISPs, who in turn pay to connect to overseas ISPs, thereby connecting Korea to the world. Small foreign content providers pay to connect to their home ISPs who pay to connect to higher-tier foreign ISPs who help deliver their data to Korean ISPs, while the big foreign content providers like Google and Netflix are spending their own resources to deliver directly to domestic ISPs in Korea or nearby either through sub-sea cables or cache servers. Once connected, these network routers are bound by a mutual promise of delivering data packets to their neighbor routers without discrimination based on origin, type, content, or whether or how much the sender has paid for delivery. It is through this promise of net neutrality and the mutually cooperative efforts to connect to one another that the world has entered the golden age of communication where an ordinary person can start a movement or a business of global scale from his or her computer.

President Moon, you were a human rights lawyer and should understand how, in addition to its economic promise, internet access is crucial to and has become a necessary ingredient of the global democratization and human rights movement. Without net neutrality, people’s ability to share their ideas with many will be severely restricted by the imposition of charges for data delivery. This will impact more than the delivery of streaming media; it will impact the global spread of ideas in the fight for democracy and human rights.

We, therefore, reiterate our call that you immediately oppose the proposed amendments to the Telecommunications Business Act and take positive steps to protect net neutrality in line with Korea’s obligations to protect the right to freedom of expression and access to information. This includes repealing or amending existing laws that challenge net neutrality, such as the requirement on CPs to ensure service stabilization measures and the 2016 SPNP rules.

Fight for the Future