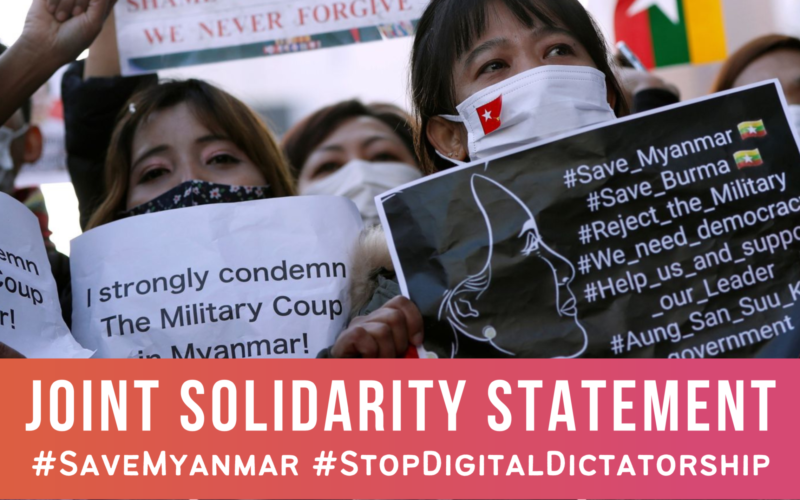 We, ALTSEAN-Burma, Cambodian Center for Human Rights (CCHR), the Institute of Policy Research and Advocacy (ELSAM), Manushya Foundation, PEN Myanmar, and Southeast Asia Freedom of Expression Network (SAFEnet), as the ASEAN Regional Coalition to #StopDigitalDictatorship, stand in solidarity with civil society, independent media, and democratically elected representatives in Myanmar and call for the restoration of their democratic rights, online and offline. Myanmar reverted to a military regime with the arbitrary detention of civilian heads of its government on 1st February 2021, when the Parliament was scheduled to convene for the first time since the November 2020 general elections. Therefore, we condemn the Myanmar military – known as the Tatmadaw – in their attempt to forcibly grab political control, by undermining democratic governance, and disregarding the rights and freedoms of its people offline and online.

We denounce the actions of the Tatmadaw to weaponize the constitutional provisions of Section 417[1] and 418 (a)[2] of the 2008 military-drafted Constitution of Myanmar without checks and balances in place, to create an environment of fear and crackdown on dissenting voices including journalists, activists and political leaders democratically elected following an election on 8 November 2020, and to shutdown the internet and all communication channels in an attempt to stem the flow of information to the outside world.

Although the internet and phone lines have been partially restored, we call on the Tatmadaw to end all present as well as future attempts to violate democratic rights and freedoms, according to the international human rights obligations and commitments of Myanmar. This includes protections guaranteed under Article 3 and Article 19 of the Universal Declaration of Human Rights (UDHR), and Article 9 and Article 19 of the International Covenant on Civil and Political Rights (ICCPR) respectively, which protects individuals against arbitrary arrest and detention; and also protects the right to freedom of expression of individuals as well as the press such as their right to seek, receive and impart information through the media, including through electronic media.

On the morning of 1st February, the Tatmadaw detained 16 political activists and more than 42 key political leaders, such as State Counselor Aung San Suu Kyi and other leaders from the elected National League for Democracy (NLD). More activists and dissidents have gone into hiding. Up to 1,046 democratically elected Members of Parliament (MPs) not aligned with the military risk arrest and detention. A year-long state of emergency has been declared, with Vice-President and former lieutenant-general Myint Swe sworn in as the acting President. According to Section 418 (a) of the 2008 Constitution, Myint Swe immediately transferred legislative, executive and judicial powers to the Commander-in-Chief of the Defense Services, Senior General Min Aung Hlaing who has previously been identified as having a key role in the atrocities committed against the Rohingya Muslim community. Additionally, despite these claims that the emergency was imposed following the constitutional provisions, appointment of an acting President without approval of the President is completely unconstitutional.

Ahead of the coup, access to the internet and phone data were disrupted, with organizations Netblocks and Internet Outage Detection and Analysis (IODA) identifying Internet connectivity outages in Myanmar including in the capital Yangon starting from 3:30 am local time on 1st February, followed by a larger drop at 6:50 am local time. This shutdown of communication channels made permissible during an emergency under Section 77[3] of the Telecommunications Law, makes it difficult and almost impossible for the timely reporting of human rights violations committed during this period and blocks information about the COVID-19 pandemic from reaching the people amidst the ongoing health emergency. In addition to killing the switch of internet and communication access, the Tatmadaw also controls information being shared, as control was taken of National broadcaster MRTV’s TV station along with other media being controlled by the military. Only the military media, Myawaddy Television is currently being allowed to report news developments – A MEDIA OUTLET MANY HAVE ACCUSED OF DISINFORMATION.

The impact of this internet shutdown and bandwidth throttling has not just led to a loss of access to information but has also caused the people of Myanmar to lose access to ATM machines, led to private businesses stopping their operations, with students unable to attend their online classes.

This practice of controlling information in the media and switching off connection to the internet and communication channels, takes the dictatorial practices from offline to the digital space. This digital dictatorship violates the online rights of people, especially freedom of the press, freedom to access information, and freedom of expression. Disruption of internet access and controlling the media have become a worrying trend across ASEAN, including in Rakhine and Chin states of Myanmar as well as Papua and West Papua in Indonesia. On 27 June 2016, the United Nations Human Rights Council denounced this practice of government-ordered internet shutdowns in violation of international human rights law that aims to or intentionally prevents or disrupts access to or dissemination of information online.

Therefore, we call on the Myanmar military to:

[2] Section 418 (a) of the 2008 Constitution of Myanmar states that ‘In the matter concerning the declaration of the state of emergency according to Section 417, the President shall declare the transferring of legislative, executive and judicial powers of the Union to the Commander-in-Chief of the Defence Services to enable him to carry out necessary measures to speedily restore its original situation in the Union…’