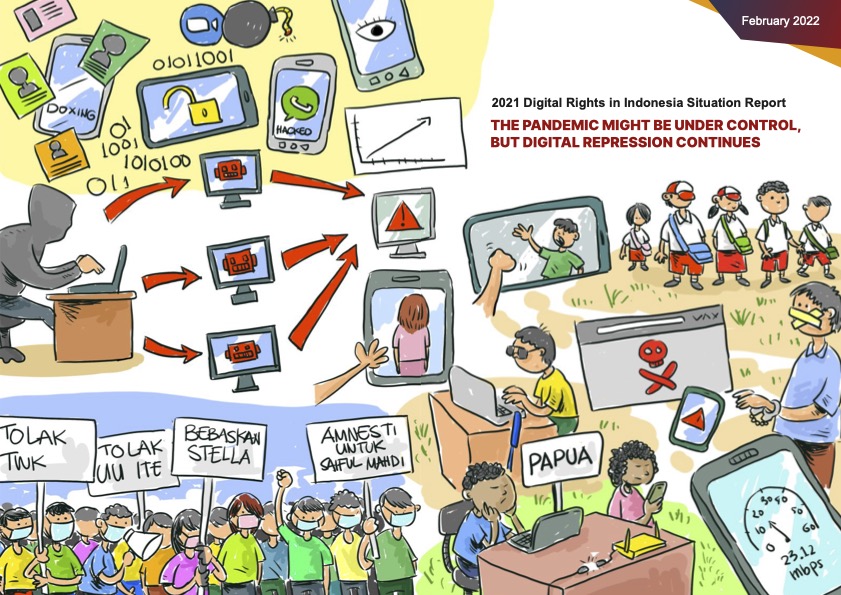 Southeast Asia Freedom of Expression Network (SAFEnet) launched the Indonesia Digital Rights Situation Report 2021 on Wednesday (2/3/2022). Based on monitoring and SAFEnet analysis, the situation of digital rights in Indonesia throughout 2021 has not improved. Digital repression is still rampant, including restrictions on Internet access, criminalization of citizens’ expressions on social media, and rampant online gender-based violence (OGBV), as well as digital attacks on civil society.

“The digital rights situation in Indonesia is still not getting better. While the pandemic is getting under control, digital repression is actually getting higher,” Damar Juniarto, Executive Director of SAFEnet said at the launch of the report.

According to Damar, digital repression includes three aspects of digital rights, inlcuding the right to access the Internet, the right to free expression, and the right to online safety.

In terms of content, according to Google’s Transparency Report, in 2021, the Government of Indonesia is the country with the highest volume of requests for content removal from Google, which is 254,461 content, even above Russia (205.802). “This certainly creates a vulnerability that from the many deletions, there are contents of citizens’ digital rights that are violated,” Damar added.

Another form of receipt for this access is that there are still many disruptions to Internet access in Papua. During 2021, at least 12 Internet access disruptions occurred for security or technical reasons. From a policy and legal perspective, Indonesia has a bad record because the Constitutional Court rejected the lawsuit by the Indonesian Alliance of Independent Journalists (AJI) and Suara Papua against Article 40 of the ITE Law which is prone to misuse to limit Internet access.

On the aspect of freedom of expression, the Report shows that the criminalization of citizens’ expression using digital media also continues. Throughout 2021, there will be at least 30 criminal cases with a total of 38 victims. This number decreased by almost half from the number of victims in the previous year, 84 victims.

“Since the ITE Law was passed in 2008, this is the first time that activists have been ranked first in the number of victims based on background, namely 10 people or 26.3% of the total victims,” ​​said Damar.

In terms of safety, 2021 will also be marked by rampant digital attacks against civil society, especially critical groups, such as journalists, activists, and other human rights defenders. Two of them are the hacking of anti-corruption activists in May 2021 and former employees of the Corruption Eradication Commission (KPK) in September 2021.

Throughout 2021 there were at least 193 digital attack incidents. This number is up 38% when compared to incidents in the previous year, 147 incidents. The peak of attacks occurred in September (34 incidents), higher than the monthly average of 16 incidents.

“If you look at the background of the victims of the attacks, it becomes increasingly apparent that digital attacks in Indonesia are indeed increasingly political,” said Damar. This, he continued, can be seen from the high number of attacks against critical groups, namely activists, journalists and media, students, and civil society organizations, which accounted for 58.95% of the total attacks.

The right to online safety also increased when you see the rise of online gender based violence (OGBV). Throughout 2021, 677 OGBV reported to SAFEnet including referrals from Komnas Perempuan.

“This continuing digital repression needs to be addressed with extra efforts from many parties to increase digital resilience and joint steps to stop the decline of democracy,” said Damar.

For more detail about the report, you can download and read here.