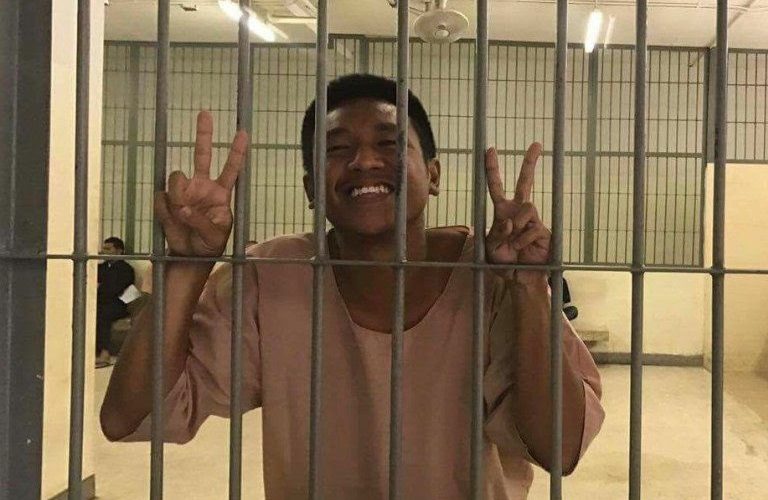 Jatuphat is accused of violating Article 112 of the Criminal Code, the lèse majesté law, for sharing on his Facebook account a controversial biography of King Vajiralongkorn published by BBC Thai. He was the first person to be arrested for lèse majesté under the reign of the new King.

Shortly after he was arrested for lèse majesté on 3 December 2016, the court released him on bail. However, his bail was revoked on 22 December after he posted a satirical message mocking the authorities on his Facebook account. The message read, “Economy is poor but they (authorities) took my money for bail.” Despite the fact that more than 2,000 people shared the same article on Facebook and millions read it, he was the only one arrested for lèse majesté.

Before the trial began, the court attached a flyer in front of the courtroom informing about 10 people who came to show support to Jatuphat and other observers that the trial will be held in camera for the reason of ‘national security and the monarchy.’

The first witness called to testify at the court was Lt Col Pitakpol Chusri, a military officer from the 23rd Military Circle who filed a lèse majesté complaint against Jatuphat. After the court, Jatuphat told media at the court that he feels uncomfortable as he had developed skin infection in prison.

In a separate case, Jatuphat is also facing trial in a military court for violating of the junta’s ban on political gatherings of five or more persons after they gathered at the replica of the Democracy Monument in Khon Kaen Province to commemorate the first anniversary of the coup d’état on 22 May 2015.