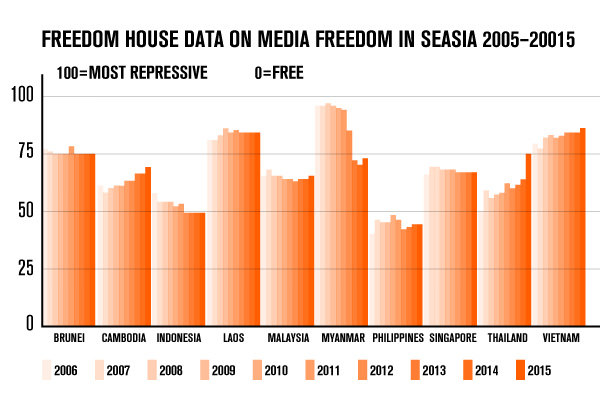 Last week, Freedom House, the Washington, DC based human rights organization, released its annual report Freedom of the Press 2015, a damning assessment in the decline of global media freedoms.  Around the world journalists were subject to an increasing battery of national security laws, sedition charges, censorship, arrest, intimidation and the extrajudicial killing of journalists. Freedom House concluded that the global conditions for journalists and a free press are the lowest throughout the world than anytime in the past decade, fundamentally challenging democracy, good governance and the rule of law.

Southeast Asia was no exception.  Freedom House only rated two Southeast Asian states, the Philippines and Indonesia as “partly free,” the remainder earned a rating of “not free.”  No country in the region has a “free” media.  Southeast Asia includes some of the most controlled media environments in the world, including Vietnam (187), Laos (183), Brunei (167) and Myanmar (163).

The average Freedom House score for Southeast Asia is 68.7, roughly the same score garnered by Cambodia.  The best ranked country in the region, the Philippines, is still only ranked 89th in the world, though in large part that is due to the high number of extrajudicial killings of journalist. The Philippine government’s inability or unwillingness to investigate the killings of journalist has created a culture of impunity.

Malaysia, Singapore and Brunei have maintained a comfortable plateau of censorship and the cowing of opposition figures through libel cases; The Malaysian and Singaporean governments have never lost a libel case, which are targeted against opposition politicians and regime critics.  Malaysia’s passage of amendments to its already draconian and politically abused Sedition Act have continued to undermine democracy and the rule of law.  Following the ruling coalition’s popular electoral defeat in 2013, there was a 128 percent increase in the use of the Sedition Act. In the first quarter of 2015, alone, the number of Sedition Act cases (26) was already 64 percent of the total number for 2014 (41).  Those recently charged under the Sedition Act include a member of parliament for a speech she gave in session about the politicized judiciary. Another was a legal expert giving testimony in court.

Media freedoms have largely suffered setbacks across Southeast in the past decade.  Between 2006 and 2015, only Indonesia and Myanmar have seen appreciable improvements.  And even Myanmar is seeing its appreciable gains start to be rolled back.  Repression has increased in consistently in Vietnam, Laos and Malaysia, and significantly in Cambodia, with a 13 percent decline.  Vietnam is one of the world’s leading jailers of journalists and bloggers, and recently shut down an entire newspaper for its scathing critiques on the government’s failed  anti-corruption measures.

But no country has fallen in the rankings as much as Thailand, which between 2006-2015 saw a 50 percent fall in media freedoms.  Martial law, the Computer Crimes Act, Article 112 of the Criminal Code Act, Emergency Decree, and now Article 44 of the interim constitution have stifled free speech. The Freedom House report on Thailand is damning.  Thailand is well beyond mere censorship. There are currently four decrees curtailing press freedoms. Most recently the military authorities shut down a pro-opposition TV station.  The NCPO leadership has threatened to shut down any media that is critical of the junta and to have offending journalists executed. Thailand is currently ranked the 168th most repressive media environment out of 199 countries in the world.

To put it another way, two coups and ten years of military meddling in Thai politics coupled with modest improvements in the political situation in Myanmar, have left the a more repressive media environment in Thailand than in the recently Orwellian state of Myanmar.  Only the one party communist states of Laos and Vietnam, where all media is state owned, have more repressive media environments than Thailand.  Indeed the only country to fall as much as Thailand in the Freedom House rankings between 20014 and 2015 was Libya, a near failed state in the midst of an anarchic civil war.  You are known by the company you keep.

Thailand’s internet freedom, likewise, received a significant downgrade by Freedom House in their March 2015 survey.  Thailand had the most controlled Internet next to Vietnam, with the second to worse rankings for control on content and violations of users’ rights. The government has recently boasted that it has blocked 25,000 websites or social media pages with offensive content.  In December 2014 new regulations to effect increasing ISP and social media responsibility to police the internet.

One of the leading justifications for the coup was to rid the country of pernicious levels of corruption in politics. The draft constitution tries to eliminate corruption through unelected bodies  that serve as checks on politicians, while at the same time limiting the power of parties.  The constitution tries to ensure governance by “good people” rather than those that have a democratic mandate.  Yet one cannot legislate away human nature.  Good governance and anti corruption can only be achieved through freedom of the press.  The harsh restrictions on Thailand’s media insures that Thailand’s political development will continue to be setback.  And as that happens, it will continue to lose out to more transparent neighbors, both interns of governance and trade and investment.

Zachary Abuza, PhD, is Principal of Southeast Asia Analytics, specializing in security, governance and human rights in the region.